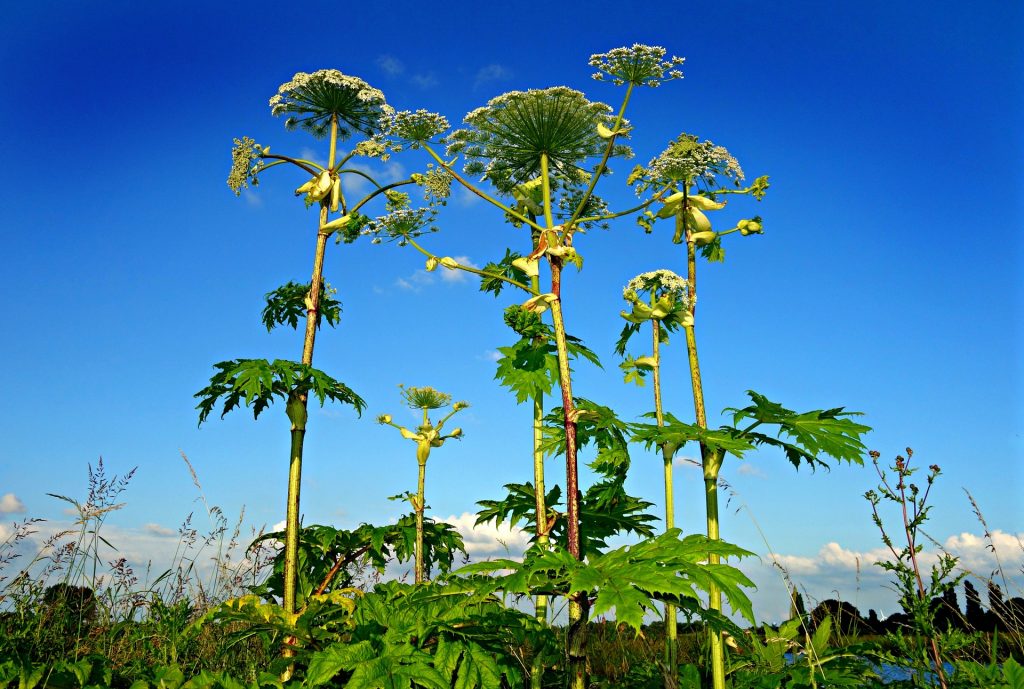 Giant hogweed (Heracleum mantegazzianum) is often referred to as the UK’s most dangerous plant, with its toxic sap that can cause life changing burns and blisters for those that come into contact with it.

So, how do you identify the plant?  What will happen if you touch it?  How do you get rid of it?  We answer your questions here.

What is Giant hogweed?

A close relative of cow parsley, Giant hogweed was introduced to the UK as an ornamental plant in the 19th century and quickly spread out of control.

It is an invasive species commonly found along river banks, roads and railways as well as on wasteland and in gardens and allotments.  Reaching up to 5 metres in height, Giant hogweed has thick, purple spotted bristly stems and large, white umbrella like clusters of flowers.

Once in flower, Giant hogweed can expel up to 50,000 seeds per plant, taking advantage of passing traffic and water flow to disperse and spread.

What happens if I touch Giant hogweed?

Although touching the plant is painless, chemicals in the sap can cause severe skin irritation and photosensitivity.  Usually developing over a number of hours, symptoms of Giant hogweed contact look very similar to a bad case of sunburn and include painful rashes, boils and blisters.

Further exposure to sunlight can reactivate these symptoms, causing frequent and long lasting damage to the skin.

If you think you have been in contact with Giant hogweed then it is important to wash the affected skin thoroughly and as soon as possible with soapy water, seeking medical advice if you start to feel unwell.

How do I get rid of Giant hogweed on my property?

Giant hogweed is listed under The Wildlife and Countryside Act 1981 (schedule 9), meaning it is an offence to plant or otherwise cause it to grow in the wild in England and Wales (similar legislation applies in Scotland and Northern Ireland).

There is no legal obligation for owners to eradicate Giant hogweed on their own land, however they do have a duty of care to ensure it does not spread further afield.

Controlling Giant hogweed should only be done wearing full protective clothing, ensuring that all garments and tools are thoroughly cleaned after contact with the plant.

Equipment such as strimmers should not be used to tackle Giant hogweed as this can result in the airborne distribution of seeds, and chemical treatment in close proximity to rivers, streams and ponds should only be conducted by a competent operative and in conjunction with the Environment Agency.

Classed as a controlled waste, Giant hogweed can only be disposed of at licenced landfill sites and with the correct documentation.  For this reason, it is usually recommended that you involve an experienced contractor in the removal of this invasive plant.

If you think your land could be affected by Giant hogweed then give us a call today on 0114 303 5123 to discuss your options with our invasive species specialists.